Mayor Thomas M. McDermott, Jr., in partnership with Region Racing Powered by Strack & Van Til is proud to bring the inaugural Region Riot Criterium bike race to the city of Hammond on Saturday, May 9, 2020 from 8:00am until 6:00pm.

A criterium cycling race, also known as a crit, is a bike race consisting of multiple laps around a closed circuit, the length of each lap or circuit ranging from 800 meters to 5 km. The Riot course is 2 km (1.3 miles). Events often have prizes called primes (pronounced /priːmz/ ) for winning specific intermediate laps. An announcer broadcast tells the riders that whoever wins the next lap, wins the prime. Spectators are welcome to watch the cyclists compete at designated spots along the course. Since these races are known to be extremely competitive, sometimes there is bumping and crashes in the pack.

“I am really excited to bring something fun and different like a criterium cycling race to Hammond. As everyone knows, I am an avid cycler, and I cannot wait for this competition”, says Mayor McDermott. Dean Button, the city of Hammond’s Engineer is one of the event organizers and a competitor as well. “I’ve enjoyed racing and thrilled to work with Mayor McDermott to bring this race to my home town. We want the event to become tradition.” 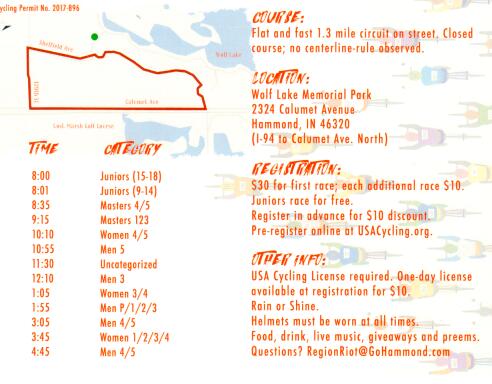 Mayor Thomas M. McDermott, Jr. and the Hammond Port Authority are proud to welcome Rick Michels’ and his 24-piece big band back to the Pavilion at Wolf Lake for Sinatra Forever on Saturday, September 18, 2021.

Sinatra Forever: A Salute to Frank Sinatra is a concert that pays homage to the greatest singer of all time.

Rick Michel is one of Las Vegas’ premier singers, a man of whom the show business bible Variety said: “He is the closest thing to Frank Sinatra we have ever heard.”

Sinatra Forever is a timeless concert and part of the American Songbook with all the original arrangements and musicians that backed up Frank Sinatra.

This year, The Pav will host another Rick Michel show: “Frank & Sammy: Me and My Shadow”.

Me and My Shadow will feature Rick Michel as Frank Sinatra and Bryan Clark as Sammy Davis Jr. plus about 18 other impersonations like; Michael Jackson, Rodney Dangerfield, Stevie Wonder, Bob Hope, Tom Jones, The Godfather, Neil Diamond and much more. Don’t miss out on this “One of Kind” show with so much music, comedy and impersonations you’ll think you’ve seen 10 concerts…”

Mayor Thomas M. McDermott, Jr. and the Hammond Port Authority are proud to welcome Rick Michels’ and his 24-piece big band back to the Pavilion at Wolf Lake for Sinatra Forever on Saturday, September 14th

Sinatra Forever: A Salute to Frank Sinatra is a concert that pays homage to the greatest singer of all time.

Rick Michel is one of Las Vegas’ premier singers, a man of whom the show business bible Variety said: “He is the closest thing to Frank Sinatra we have ever heard.”

Sinatra Forever is a timeless concert and part of the American Songbook with all the original arrangements and musicians that backed up Frank Sinatra.

Bring a chair, blanket, and picnic basket and enjoy an evening under the stars with great music.

Should there be inclement weather, the event will move indoors to Calumet College of St. Joseph’s gym.

50 Cent is coming to Hammond! Curtis James Jackson III, award winning rapper, entrepreneur, actor, and producer with more than 30 million albums sold worldwide will bring his hits such as Candy Shop, In Da Club, and Disco Inferno to the Pavilion at Wolf Lake on Saturday, August 17th. You won’t want to miss the concert of the summer!

50 Cent, born Curtis James Jackson III, is an award-winning rapper, entrepreneur, actor and producer from Queens, New York. Recognized as one of the most talented and prolific music artists of his time, the Grammy Award winner rose to fame with his record-shattering debut album, Get Rich or Die Tryin’ and has since sold more than 30 million albums worldwide and been awarded numerous prestigious accolades. Jackson has leveraged his star power to cross over with unparalleled success as an entrepreneur, actor and producer. From Get Rich or Die Tryin’ being one of the fastest selling albums in history to creating one of the most influential deals in hip-hop with the sale of Vitaminwater, Jackson continues to break records. He currently has the critically-acclaimed #1 show on Starz, “Power,” in which he not only co-stars but also serves as executive producer and director leading into season six.

Jackson has carved out a thriving television and film career as both a best in class producer and star. In 2005, he founded G-Unit Film & Television, Inc. which has produced a wide variety of content across numerous platforms and sold a myriad of shows to various networks. Among these is “Power,” which premiered in June 2014. In October 2018, Jackson and Starz/Lionsgate closed an unprecedented deal for Jackson’s G-Unit Film & Television, Inc. The partnership, touted as among the most significant deals to date for an Executive Producer in premium television will focus on expansion of the POWER universe, new scripted and non-scripted development, feature and gaming/interactive development via Lionsgate. He also has in development new projects for the network, including “Vanguard,” “BMF. Most recently, ABC has ordered the series “For Life” from Jackson, a serialized legal and family drama. Additionally, Jackson has teamed up with Lala Anthony to executive produce “Intercepted” a soapy drama in development at Starz.

Additional credits include the variety show “50 Central” on BET and two dramas for Sony Crackle “The Oath,” the networks most-watched new original series and “RPM,” which is currently in development. Jackson’s successful film career has included roles in several blockbusters: most recently “Den of Thieves” co-starring opposite Gerard Butler, which Jackson has signed on to produce the sequel along with Butler. Jackson has also appeared in Antoine Fuqua’s boxing drama “Southpaw,” alongside Jake Gyllenhaal and “Spy” with Melissa McCarthy, and reprised his role in “Escape Plan 3.”

The exceptional businessman serves as CEO of G-Unit Records, which he founded in 2003 and has since signed a host of multi-platinum artists. Jackson continues to dominate the charts with hits like the recently released “Still Think I’m Nothing,” and he is continuously recording new music.

Diamond Selling, Multi-platinum, Grammy award-winning rap superstar, entrepreneur, philanthropist, and actor, Nelly, has continually raised the bar for the entertainment industry since stepping on the scene in 2000 with his distinctive vocals and larger-than-life personality. His collaboration with Florida Georgia Line received Diamond status and he is only one of seven rappers to reach this honor. He is touring around the globe and recently was the first artist to play in Saudi Arabia with a mixed gender/family crowd. He is the first hip hop artist to play with multiple symphonies nationwide and played himself in BET’s Real Husbands of Hollywood with Kevin Hart. His sports knowledge and love of all sports secured him a gig as a sports caster with Skip Bayless. 2019 is going to be a huge year for the hip hop mogul, currently Nelly is in studio preparing for new music to be released in addition to several business ventures to be announce in first quarter.

Formed in 1995, Grammy Award-nominated multiplatinum Mississippi rock band 3 Doors Down consistently captivates audiences worldwide. The quintet’s many accolades include selling 16 million albums globally, receiving three Grammy nominations, and winning two American Music Awards, and five BMI Pop Awards for songwriting including “Songwriter of the Year.” Their debut The Better Life, became certified six-times RIAA platinum in 2000 and was fueled by the success of juggernaut hit “Kryptonite”. This was followed by 2002’s sophomore album, Away from the Sun which went triple-platinum and saw similar success with “When I’m Gone” and “Here Without You”. 2005’s platinum Seventeen Days and 2008’s 3 Doors Down each earned #1 debuts on the Billboard Top 200, while Time of My Life landed at #3 in 2011. Ignited by the single “In The Dark”, 3 Doors Down unleashed their sixth full-length album, Us and the Night, which debuted top 10 on the Billboard Top 200 in 2016.

The legendary Roots Crew have become one of the best known and most respected hip-hop acts in the business, winning four GRAMMYS, including “Best R&B Album” for Wake Up!, “Best Traditional R&B Vocal Performance” for “Hang in There” (with John Legend) and “Best Group or Duo R&B Vocal Performance” for “Shine.” This brings the band’s GRAMMY nomination count to twelve. Additionally, “The Roots Picnic,” a yearly star-studded mix of musicians, has become a celebrated institution. The Roots were named one of the greatest live bands around by Rolling Stone and serve as the official house band on The Tonight Show Starring Jimmy Fallon. Most recently, The Roots announced that they are developing an animated children’s series, along with a live action children’s series, in partnership with Amazon.

“Los Huracanes del Norte” have achieved a numerous collection of gold and platinum records. They have also been recipients, on two occasions, of the prestigious award “ El Heraldo de Mexico” and have received The Keys to the cities of Houston, Dallas, Los Angeles, Chicago and Obregon, Sonora Mexico. “Los Huracanes del Norte” have been five-time American and Latin Grammy nominees. They have won popularity trophies at the Acapulco Festival and from other various institutions that aid Mexican immigrants in the United States, and have also been granted recognition in their contribution to the regional Mexican music.

In Chicago, Illinois an avenue was named “Los Huracanes del Norte,” in honor of the band, an avenue that was once named Laramy. On April 20, 2012, the band received a tribute in Las Vegas, Nevada where they were given a star on the walk of fame, which can be located in front of the hotel New York, and authorities of the state of Nevada declared the 20th of October the day of “ Huracanes del Norte”. On August 20, 2012 having accomplished 40 years in the music industry the band was honored with a tribute on behalf of the music family (music executives, composers, artists, etc.) at the convention “Monitor Latino” held in Los Angeles, California.